A burning question I have is…. I learnt how to make rye sourdough with you some years back and loved it. Since then I’ve bought a kitchen aid with dough hook.

Can you please tell me at what point in the kneading stage should I use this and for how long? Olivia

At Riot Rye, we developed The Common Loaf Sourdough recipe using a stretch ‘n’ fold method to ensure accessibility for people of all types of physical abilities. It’s also an easy-to-learn recipe which doesn’t require people to learn how to knead. However, sometimes bakers may wish to use a stand mixer to develop their dough. I use a spiral mixer in the Bakehouse for most of my doughs, the Kitchen Aid you’re using is a planetary mixer. (There’ll be a post on different types of mixers at a later stage.) 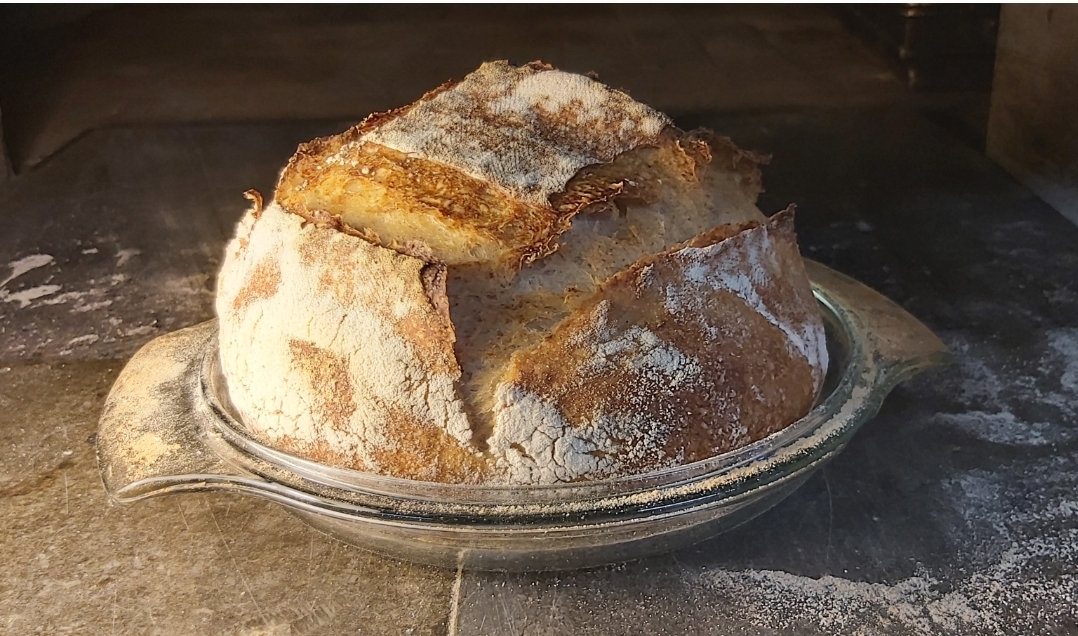 Note: if you have a mixer where the bowl is fixed and the dough hook moves around it – a planetary mixer – don’t go over ½ the full capacity of the bowl eg. a 3 ltr bowl will take up to 1.5kg of dough, otherwise you can burn out the motor.

Even when using a mixer, we must still first bring our focus to ensuring we hitting the “sweet spot” with our levain. (Refer to The Sourdough Starter Cycle ebook for this.)

With regard to the actual mixing of the dough, when we use a mixer, we put the measured water in first, holding back a 10-20g splash. (We will add this with the salt later.) By putting the water into the mixing bowl first, we will help to prevent a lump of dry flour getting stuck to the bottom of the bowl.

We then add the starter/levain and the flour to the water.

Hold back on the salt.

Mix for 2 mins on slow speed – just to combine all the ingredients.

Let the dough rest (autolyse) for 20-30 mins. This step will aid with developing the extensibility of the dough and reduce your overall mixing time by about half: saving on energy and your motor. (It isn’t absolutely necessary though if we are in a rush.)

Sprinkle the salt on top and add the reserved splash of water from earlier.

As bakers, we are interested in the Strength and Extensibility of our dough.

For this recipe we are going to mix for Strength and not Extensibility.

We can tell when enough strength has been built up in the dough, once the dough begins to come off the side of the mixing bowl. As soon as this happens, we stop the mixer, wet our hands and cut a piece of dough a bit larger than a golf ball off the total dough.

We are not trying to stretch the dough apart but trying to feel the resistance to it breaking.

A developed dough made with strong white flour should resist breaking when pulled apart.

When we learn what this resistance to breaking feels like, we will know how to judge the strength of the dough.

The extensibility of the dough will be regulated by how much water we use (hydration) and we will discuss this in another post.

When satisfied that enough strength has been developed, we remove the dough from the mixing bowl and place in an oiled plastic container. A large lunchbox works well.

A dough with a temperature of between 22°C and 26°C should take 90-120 mins bulk fermentation.

The dough will receive two folds during the bulk fermentation. The first after 30 mins and the second 30 mins later.

After 90-120 mins bulk fermentation, the dough should have developed good volume.

Turn the dough out onto the counter, divide and round.

You can follow the rest of The Common Loaf Sourdough recipe from here.